From the recent videos and posts on Jacqueline Fernandez’s Instagram page, it seems that she is missing pole dancing very much. She has shared some glimpses of the practice session of Pole dancing on her Instagram, page along with her trainer guiding her through the whole process. It the caption she has mentioned that its been 3 years since she did this. Certainly this pandemic is making everyone return back to their hobbies. 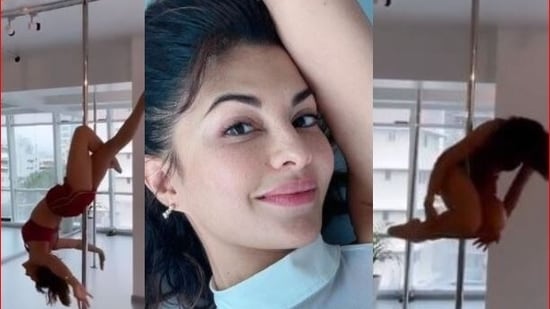 Jacqueline has done pole dancing in many of her Bollywood songs,mostly which were item songs, including Chandralekha (for the movie  A Gentleman, casting opposite Sidharth Malhotra) and Heeriye (for themovie Race 3, opposite Salman Khan).

Initially the houseful 3 heroine is seen with her friend celebrity stylist Chandini Whabi. After a few seconds, she quits and leaves the video in midway. The trainer also shouts, “Oooh! Man!” Previously also, Jaqueline used to take to Instagram all the moments spent with her friends at their places. They also used to hangout at the restaurants and the eateries and shared the picturesof food.

As of now, Jaqueline has a number of films in the pipelined process for a next few months including Rohit Shetty’s Cirkus alongside Ranveer Singh , Salman Khan for the sequel to their 2014 hit, Kick and many more. For more updates on Entertainment and Bollywood, stay tuned to the latest news and posts of The Midget Herald.